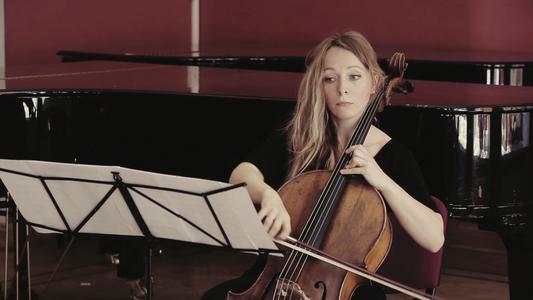 Bachiana Mexicana No. 4 for cello solo "Bach in Tehuantepec"

This work was written in the Summer of 2017. It was born out of an artistic collaboration between the American visual artist Jeannette Betancourt and Venus Rey Jr.

The first movement (Slowly, with expression) has e Beethovenian drive which reminds us the piano sonata opus 111. The second movement is a very emotional recitativo. The third movement (Allegretto doloroso) is built upon a stylized Oaxacan melody and four variations (Oaxaca is a region in Southeast Mexico): the first one in quavers, the second one in triplets, the third one in semiquavers and the final variation in the lower register of the instrument. The Finale is a bravura musical piece with an unusual meter: 10/8. The temperament of this final movement has a strong Latin accent.

The work was performed and recorded in Moscow by Russian cellist Olga Kalinova. It has been published by Da Vinci Classics.